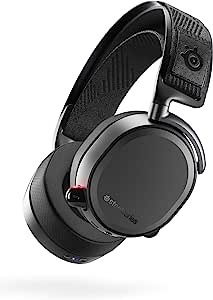 Other Sellers on Amazon

What other items do customers buy after viewing this item?

Your question might be answered by sellers, manufacturers or customers who bought this product.

4.0 out of 5 stars
4 out of 5
1 customer rating
How are ratings calculated?
To calculate the overall star rating and percentage breakdown by star, we don’t use a simple average. Instead, our system considers things like how recent a review is and if the reviewer bought the item on Amazon. It also analyses reviews to verify trustworthiness.

There are 0 customer reviews and 1 customer rating.

Anthony C.
5.0 out of 5 stars Excellent Wireless Headset Choice for both PS4 and Nintendo Switch
October 12, 2019 - Published on Amazon.com
Verified Purchase
I’ve gone through exactly 3 headsets (The official Microsoft Xbox One headset, PlayStation Gold Wireless headset 2018, and a Razor headset) looking for a viable option that had both DECENT audio and mic quality, as all the headsets I’ve purchased have had build quality issues and terrible mic quality. I’ve given up on picking up a wireless headset as from what I’ve seen, are incredibly expensive. I saw the ad for the SteelSeries Arctic 1 headset and it seemed too good to be true (very cheap price for a wireless headset, and interchange between 3 consoles) and to my surprise, it lived up to pretty much all its claims.

Wireless connectivity works seamlessly with its included dongle, and I have had zero dropouts or latency issues with it on both PS4 and Nintendo Switch. I originally purchased this headset primarily for the PS4, as I imagined wireless headsets were completely incompatible with the Nintendo Switch, but the headset does in-fact work effortlessly and all the buttons on the headset (Mic Mute On/Off, Volume Dial) work on both systems. Mic quality is excellent as well as audio quality, it’s perfectly balanced and not ridiculously skewed towards bass, and the volume can be raised very high on both consoles if you want. Battery life so far has also been great, it’s something I haven’t had to worry about when using and I only had to charge them once every week out of habit. The headset itself doesn’t feel flimsy and seems decently built, It’s pretty light and is surprisingly comfortable to wear, so much I use it also when I’m on my laptop. The only thing that slightly annoys me is that when I switch playing consoles and want to use the headset on it, I have to get up and unplug the headset dongle and connect it to the console I’m using (say, from the PS4 to the Nintendo Switch). This is pretty much a first world problem, but it’s something I’ve come across every once in a while.

Overall I have to say I’m really loving this headset, if you were on the fence for this thing I really recommend you give it a try.

UPDATE June 2020: It’s been 8 months since I’ve bought this headset, and I just wanted to report back that it has held up ROCK SOLID. This thing is by all means not flimsy, and the battery life has held up incredibly well. I’ve been gaming really long sessions, roughly 5-6 hours long each with friends online, and this thing just keeps going with no issues whatsoever. One of the few purchases I’ve made that I can say was absolutely worth it.
Read more
341 people found this helpful

Woody
1.0 out of 5 stars product broken and Steelseries has refused to replace
December 16, 2018 - Published on Amazon.com
Verified Purchase
The headphones and gamedac broke after less than a year and Steelseries has not honored the warranty. Steelseries told me to destroy the product and prove that I destroyed it in order to have my warranty claim approved. Then, after I did so, I was given a code to use on the Steelseries web store, but the code only provided sufficient funds to replace the gamedac -- not the headphones. I have received no response from Steelseries after following up multiple times regarding the claim.
Read more
302 people found this helpful

Benjamin Blaha-Nelson
1.0 out of 5 stars Poor quality on many fronts. Terrible customer service.
September 12, 2018 - Published on Amazon.com
Color: BlackVerified Purchase
I replaced my Siberia 800 after about two years of use when the batteries started swelling up and the charger broke. Fine, a quality fluke and a chance to get a fancier model, I thought. The Pro Wireless arrived broken, with the line out jack on the base station completely useless. SteelSeries seems to know that they put a cheap jack in there, because they first advised me to push my headphone cable in harder and try different cables. When that didn't work (the jack is DEAD), they put me through the most ridiculous RMA process I have yet encountered. After making screenshots of my receipt "with the toolbar date visible" (like I couldn't photoshop that?!) they required me to print out an email, break the headphones in half, and take pictures. Then I get some kind of coupon to order a new product. Lots of work. Not happy with headphones that cost this much being made so crappily.
Read more
221 people found this helpful

chris c
5.0 out of 5 stars These > Astro A50 (for ps4)
April 21, 2018 - Published on Amazon.com
Color: BlackVerified Purchase
I had the astro a50s before this. I used both for ps4 and this is by far the best headset (wireless) i had for my ps4. I also had the razer thresher 7.1. Both with the thresher and a50 I would get feedback which was apparently caused by sidetones, which neither headsets allow to be adjusted. The arctis pro wireless does allow to adjust for sidetones so if youre constantly getting feedback cause of sidetones, that shouldnt be an issue with these. The sound is superb although I heard the sound on the wired and gamedac version is better but wireless is important for me as I have a toddler running around. The battery swap function is also a plus as you never have to worry if you forgot to charge as long as you keep one in the transmitter. They are also really comfortable. For the price range, it really comes down to these or the astros and speaking as someone who has both, go with these.

The astros are trash, the headsets never lasted me more than two or three months before i had to send back for repairs and it was also a headache dealing with their customer service.

Update: I have had these almost a yr now and have yet to have any issue with them. On rare occassions I may turn the headset on and get feedback but I just turn them off and back on again and problem solved. If you are thinking of these or the astro a50's, I would go with these. The astro a50 will work for about a month before you have to send them in for repairs and you better get the extended warranty.
Read more
246 people found this helpful
Go to Amazon.com to see all 2,159 reviews 3.4 out of 5 stars
Back to top
Get to Know Us
Shop with Us
Make Money with Us
Let Us Help You
EnglishChoose a language for shopping. Saudi ArabiaChoose a country/region for shopping.
© 1996-2020, Amazon.com, Inc. or its affiliates