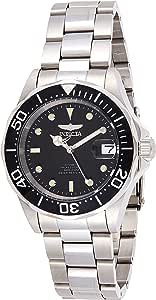 2.1 out of 5 stars 2 ratings
Share
In Stock.
International product from outside Saudi Arabia Learn More.

Secure transaction
Your transaction is secure
We work hard to protect your security and privacy. Our payment security system encrypts your information during transmission. We don’t share your credit card details with third-party sellers, and we don’t sell your information to others. Find out more
Ships from and sold by Amazon US.
Invicta Unisex-Adult Auto...
Have one to sell?
Sell on Amazon

Your question might be answered by sellers, manufacturers or customers who bought this product.

2.1 out of 5 stars
2.1 out of 5
2 customer ratings
How are ratings calculated?
To calculate the overall star rating and percentage breakdown by star, we don’t use a simple average. Instead, our system considers things like how recent a review is and if the reviewer bought the item on Amazon. It also analyses reviews to verify trustworthiness.

Kent Cline
5.0 out of 5 stars OUTSTANDING value for the money!
22 March 2018 - Published on Amazon.com
Verified Purchase
I don't know what all the controversy and debate is about these watches. Certainly Invicta has made some goofy looking watches in recent years, and yes, it is possible to buy an Invicta watch that has poor fit or finish, or an automatic movement that needs to be adjusted in order to keep good time. But for the amount of money that I paid for this watch, I am compelled to say that it has been an OUTSTANDING value. While I have not worn this watch diving (I do not dive), I have submerged the watch in water while working, without any leakage. I have done very physical activity while wearing the watch, and subjected it to vibration and shocks (while building fences and compacting gravel for instance), and it has continued to keep excellent time. It gains about 6-7 seconds per day, so every Monday since I purchased the watch, I have checked it against the US Naval Observatory's atomic clock, and find that every seven days, for over two months it has gained less than a minute. Which is excellent for ANY automatic movement.
The watch that I purchased does exactly what it advertised doing, and for a VERY reasonable price. I personally think that anyone with complaints about this particular Invicta model has unreasonable expectations about what they should get for under $100 US dollars. I have not had any trouble setting the time or date (as some other buyers have said that they have had), and the hack function (stopping the second hand in order to accurately set the time) works perfectly. The crown screws down smoothly and easily. As you can see from the attached photo, the bezel on the watch that I purchased aligns very well, and while somewhat stiff, works very well. The bracelet is as well made as anyone could reasonably expect for a watch with an MSRP of about $300, and that can be purchased online for less than $100.
Overall, this watch has already exceeded my expectations, and I fully expect that it will be an excellent "everyday" watch that I can confidently wear in all conditions, and can count on to keep accurate time within an acceptable margin of error for an automatic movement.
Takeaway: Stop complaining because you didn't get a Rolex, and enjoy the value that you get for your dollar when you buy this watch!
Read more
93 people found this helpful

Catalyzt
5.0 out of 5 stars A Beater That Can't Be Beat / Very Competitive With Entry-Level Seiko, Citizen and Orient
27 March 2015 - Published on Amazon.com
Verified Purchase
I have now owned this watch for 16 months. It was the second watch I bought when I started collecting. I now own a Seiko SKX009, a Citizen NY0040 and an NY2300, and an Orient Mako, so I have some basis for comparison in terms of automatics, and I have to say that I am astounded by how well-engineered, durable, and accurate this watch is.

The only automatic in my collection that rivals it is the NY0040, which I think is slightly more accurate, and which I prefer a bit more aesthetically, but hey-- it's basically twice the price of the 8926, and it does not have a hackable movement. Here's what I like about the 8926:

* The hacking NH35A movement. You can stop the second hand, which means you can really set the watch to the second. This feature is almost unknown in budget automatics. And you may want to set this to a good time source because of...
* The accuracy. This watch took a LONG time to break in, started out very fast, but be patient. Now, over some 48 hour periods, depending on how many hours I'm wearing it, it's only fast or slow by a few seconds. It does vary a bit more than the Citizen or the Orient, which tend to be off by the same number of seconds each day, but... holy crap. Some Rolexes and Omegas are not this accurate. I wore it in the evenings only for about 10 days this week, and it was slow 20 seconds. Then I worked out last night on the elliptical, and by this morning, it was only slow 15 seconds. The Invicta, the Citizen, and the Orient are the only watches accurate enough that you could really take for a long weekend away, without resetting them, and not worry about missing planes and trains even if you're cutting it pretty close and don't want to use your phone for time. My Seiko SKX009 is almost unusable at 20 seconds slow per day, and the Citizen NY2300 also needs to be reset almost every day.
* It is hand windable, which the Orient and Seiko are not.
* It's definitely durable. I've worn it body boarding and frequently wear it swimming.
* The date window is easy to read with middle-aged eyes. The magnification is acceptable. The Orient may be slightly more accurate, but the date never lines up properly in the window.
* In general, the watch is very readable for some reason. Everything lines up the way it should.
* The bezel clicks in half second increments, and the gear tolerances are very precise. Again, everything lines up properly.
* It does not have a month window, which is a good thing. If you own several watches and rotate through them regularly, that means your automatics have to be set pretty frequently, and setting the month is just something else to slow you down if you're leaving the house in a hurry. Besides, unless you're really high all the time, you probably know what month it is anyway. If you don't know what month it is, you have problems most watches won't solve.
* You don't have to worry about it. If it gets ripped off from a hotel room, you're out less than a hundred bucks.
* I'm glad I got the bevel-edged bezel instead of the coin-edged. If you wind up buying other diving watches, they will probably have coin-edges, so it's nice to have something different even if it's not quite as easy to grip.
* I think the idea that an accessory says something about someone as a person is pretty lame, but to the extent that I ever think that way, his is a watch that says, "I like watches, but I'm not a snob-- and if you are, I don't care." I still like looking at it over a year later.
* It hasn't scratched much, or at all, except on the bottom of the band, which is inevitable. I'm pretty careful with watches, but everyone screws up from time to time, and I have no big nicks on the crystal, bezel, or case.

My only quibbles with the watch are very, very minor:

* The bezel is hard to turn in some circumstances-- when it's cold, or your fingers are. It's never locked up on me, but it's a little tight, and I use the bezel a lot for parking meters and other coarse timing. It does seem to have loosened up a little.
* It's not always easy to get the crown to position one, the middle position, for setting the date. This has gotten a bit easier with time, but it usually takes two or three tries. This is a pretty common problem with other watches, not a big deal.
* I wish the crystal was recessed instead of protruding slightly, though I never really notice this.
* It looks a little too much like a Rolex, though it doesn't quite pretend to be one.

In general, I am really shocked this watch has broken in so well and seems so sturdy at this price point.
Read more
72 people found this helpful

Brian Hartman
4.0 out of 5 stars I"m very happy with it
10 August 2018 - Published on Amazon.com
Verified Purchase
I got this watch yesterday. It's my first dive watch, and my first Invicta. I"m very happy with it. The polish on the bracelet is great, it's a nice size for my wrist, and it seems very accurate. I can only really ding it for the scalloped bezel, which is kind of hard to turn. But I don't need to turn it for anything, so that's a nitpick.

1) Seems very accurate, based on the times I've checked it so far.
2) Strong resemblance to a Rolex Submariner, which I don't think is a bad thing, because I like that design.
3) The movement supports hacking and hand-winding.
4) Solid links on the bracelet (except for the end links)

1) The scalloped bezel is hard to turn. I don't really have a need to rotate the bezel, because I don't dive, but if you do, that's something to keep in mind.
2) The lume isn't fantastic. It's adequate, but not great.
3) The screw-down crown is a little bit difficult to operate. Maybe it's just because this is my first diver, but it took me a little time to get used to screwing it down.
Read more
18 people found this helpful

K. Choi
1.0 out of 5 stars Get what you pay for...
2 November 2018 - Published on Amazon.com
Verified Purchase
Two issues.
One, the watch doesn't keep accurate time. I have found at times it's up to 5 mins slow. It's not consistent either (sometimes it loses and sometimes it doesn't) so it's not telling time reliably enough to serve it's function as a watch. I have been wearing it full time everyday so not wearing enough is not the problem.
Two, the clasp on the bracelet came apart on the second day with broken pin. I didn't hit anything or dropped the watch. It just fell apart. I had to pull a bracelet from a another watch and put it on for now but the finish doesn't match so looks kind of bad.

Overall, i'm not satisfied with the purchase.
Read more
18 people found this helpful
Go to Amazon.com to see all 1,783 reviews 4.3 out of 5 stars
Back to top
Get to Know Us
Shop with Us
Make Money with Us
Let Us Help You
EnglishChoose a language for shopping. Saudi ArabiaChoose a country/region for shopping.
© 1996-2021, Amazon.com, Inc. or its affiliates